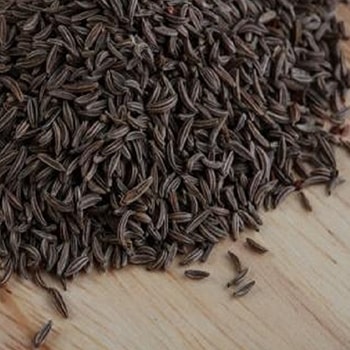 Black Cumin Seeds or Nigella seeds come from a plant called Nigella sativa native to southern Europe and western Asia. The little tear-shaped black seeds, about 1 mm long, are used throughout South Asia as a spice and flavouring. They have an earthy, peppery taste, a little like oregano. The whole or crushed seeds are often mixed through dough or sprinkled on bread, giving the bread a black colour. The seeds are also used to flavour a variety of dishes ranging from sauces, curries, pickles and meat dishes to vegetables and fruit pies.
Small, black nigella seeds are a confusing spice to many people because of the many names they go by. In India they are known as kalonji and in the United States they are called charnushka. They are also frequently (and mistakenly) called black onion seeds, black cumin and black caraway. However, they have no relationship to cumin, caraway or onions (apart from flavour),and are very much their own spice.
Black Cumin seeds or Nigella seeds are hard and crunchy with a flavour like toasted onions. They are dry roasted in India and used on flatbreads like naan and they are particularly good with potatoes and root vegetables. They are also one of the five spices that make up panch poran, a spice mixture from Bengal.