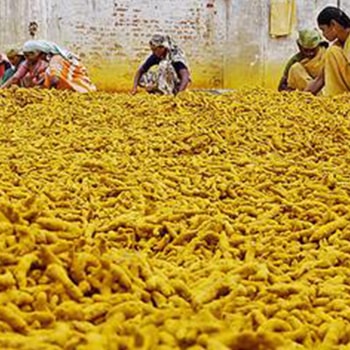 Turmeric (Curcuma longa) is a rhizomatous herbaceous perennial plant of the ginger family, Zingiberaceae which is native to tropical South Asia. It is also known as kunyit (Indonesian and Malay) or haldi or pasupu in some Asian countries. Turmeric has a peppery, warm and bitter flavour and a mild fragrance slightly reminiscent of orange and ginger.

Turmeric comes from the root of the Curcuma longa plant and has a tough brown skin and a deep orange flesh. In medieval Europe, turmeric became known as Indian saffron, since it is widely used as an alternative to the far more expensive saffron spice. Turmeric, the bright yellow coloured spice is a powerful medicine to treat a wide variety of conditions like flatulence, jaundice, menstrual difficulties, bloody urine, haemorrhage, toothache, bruises, chest pain and colic.

Turmeric (Curcuma longa), the bright yellow of the spice rainbow, is a powerful medicine that has long been used in the Chinese and Indian systems of medicine as an anti-inflammatory agent to treat a wide variety of conditions, including flatulence, jaundice, menstrual difficulties, bloody urine, hemorrhage, toothache, bruises, chest pain, and colic.